ASP.NET security module evolved time to time. First in 2005, Microsoft introduced ASP.Net Membership which is used to authenticate users using Forms authentication and the user names, password etc. stored in the SQL Server database. There were few limitations with this framework as the database schema was designed for SQL Server only and you cannot change it. Secondly, if you wanted to extend some more properties related to profile information etc. you have to create separate tables. Another limitation is OWIN. Since the authentication is based on Forms Authentication, the membership cannot use OWIN.

Today, everyone maintains social network accounts like Twitter, Facebook, etc. and people most likely prefer to login or linking applications with these accounts rather creating new ones.

Keeping all these limitations Microsoft developed another framework “ASP.Net Identity” that does not only supports OWIN but more or less the extension and customizing of the authentication module is far easy and practical as compared to the ASP.Net Membership framework.

What is ASP.Net Identity?

ASP.Net Identity is a new membership framework to provide user logins and security in web applications. It allows adding login features in web application and also easily customizable to extend the user information.

Following are some of the feature of the ASP.NET Identity system taken from http://www.asp.net/identity/overview/getting-started/introduction-to-aspnet-identity

Ease of plugging in profile data about the user

ASP.Net Identity comes with ASP.Net MVC 5 or you can also add it using NuGet Package manager console. Identity framework is based upon three libraries namely

Usually mid – large sized web applications are divided into different layers i.e. Presentation, Service, Business, Data Access etc. and usually models resides on the common layer which can be used by data access, service and presentation layers. When designing the architecture of web application and implementing security we have to follow the basic style of placing code in specific layers otherwise the code become shambolic.

In ASP.Net Identity, as the models are related to ASP.Net identity framework resides in Microsoft.AspNet.Identity.EntityFramework and with the help of Code First entity framework we can easily provide the association with other entities where needed.

Let’s proceed with some hands-on now

2. In case if you have Visual Studio 2010 you can manually add it using NuGet Package manager console and search term ‘asp net identity’

4. UserManager is basically the entry point for performing signing operations, it takes UserStore as a parameter which is implemented by IUserLoginStore, IUserRoleStore, IUserClaimStore, IUserStore etc to provide repositories for user-related data such as user data, passwords, claims, roles etc. UserStore takes a DbContext as parameter and have the implementation details of how the particular User is stored. If you notice the ApplicationDbContext it is derived from IdentityDbContext and not the standard DbContext class this is because the IdentityDbContext is specific to the ASP .NET Identity framework and it allows entities to have String as a primary key.

a. In the visual studio, open Package Manager Console and select your web project as the startup project. In case if you have different layer for data access components you can select that specific layer and add the references to the ASP .NET Identity framework libraries via Nuget.

b. Execute command enable-migration, that creates a Migration folder and create a Configuration class. Note: you can also enable the automatic migration by settings its AutomaticMigrationsEnabled property to true in the configuration class constructor.

c. Now open the ApplicationDBContext class and see which database connection name it’s pointing to. By default its pointing to DefaultConnection

d. To migrate the Identity tables into existing or separate database, we can change the connectionString as

e. Now execute add-migration command in the package manager and name it Initial 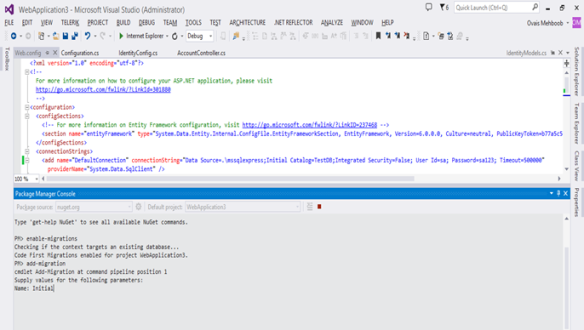 f. It creates a class with two methods Up() and Down(), Up will be called to sync the changes from code first model to the database, and Down can be used to revert changes back to last state.

g. Now execute update-database command so the new database and identity tables will be created. 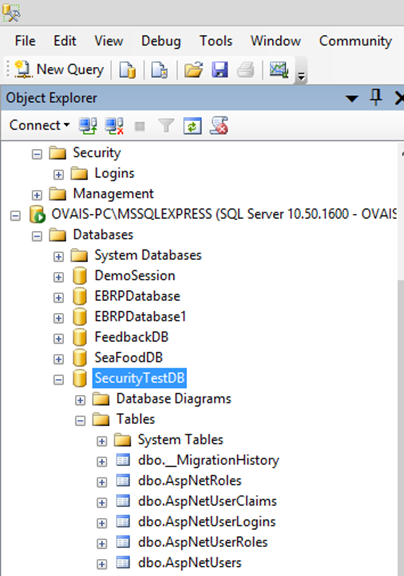 6. We can also create custom tables by adding DbSet properties for new tables in the ApplicationDbContext class and customize it according to our need.

7.  Let suppose, we want to extend the security module and provide page level security in which whenever the user navigates to any page system checks the feature set of user that belongs to particular role and redirect it to the login page if it does not exist. To handle this scenario we can follows below steps

a. Create a model named as View

b. Create another model named RolePermission

c. Add the DbSet property for RolePermission and View in the ApplicationDbContext class

d. Follow the same steps as above to migrate model changes into database.

8. Now let suppose we need to add more fields in the AspNetUsers or any other identities table we can customize it by adding a new class inheriting from Identity* class and specify new properties.

a. For example in the ASPNetRoles I need to add IsActive bit which can be used to enable/disable role rather deleting it completely I can create new class named SecurityRoles

With the power of Entity Framework and new Identity framework its quite easy now to customize security framework according to our need. The beauty is that the core classes remain intact and it doesn’t harm the underlying logic of the authentication mechanism provided by Microsoft.